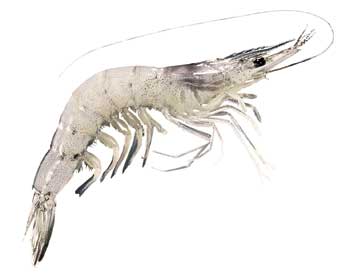 School Prawns are also known as New South Wales School Prawn and Eastern School Prawn. The head and body is semi-transparent yellowish colour with speckled brown or green spots and their antennae are brown, School Prawns are small commonly caught at around 8cm long they grow to approximately 15cm prawns this size a rare catch and most often found in smaller tidal creeks or lakes that have been naturally blocked from the ocean. School Prawns can be found in Queensland, New South Wales and Victoria Estuaries and are a valuable recreational catch.

The Bay Prawn is also known as the Greentail Prawn, Greasyback Prawn and Greasy. The body and head are semi-transparent and almost completely covered with small brown spots the body is also covered with very fine hairs give the slippery or greasy feel while handling. The tail fan is green and the antennae are reddish brown. Bay Prawns are small and common up to 10 cm long. Bay Prawns are found in Queensland, New South Wales and Victorian estuaries, however they are most prolific in Moreton Bay QLD and surrounding rivers.

The Banana Prawn is also known as White Banana Prawn and White Prawn. Their body colour is pale yellowish or semi-transparent and freckled with reddish brown spots. The lower part of the body and tail fan has dark outer margins with bright reddish orange tips on the tail fan. Banana Prawns are one of the larger catch-able prawns growing to over 20 cm they are more common caught around 15cm long when they move in large schools from the estuaries in the late summer months with February and March the most active times. Banana Prawns are found in Western Australia, Northern Territory, Queensland and New South Wales estuaries.

Australia’s favorite bait the humble prawn is one of the best baits available they fairly easy to catch and always available from your local bait and tackle shop. Whether they are live, fresh, frozen or cooked prawns are usually taken by the first fish that passes. Bream, Whiting, Flathead, Sweetlip and Snapper find them irresistible.

How to Catch Prawns

Prawning can be done in few different ways that are not only easy to learn fairly inexpensive and fun for the whole family during the summer months. Basic equipment you will need is either a Drag net, Cast net, Scoop net, Bucket and a good light.

Drag Netting
Drag Netting is easy and also the most productive way to catch a lot of prawns basically designed to be used by two people the net has fine mesh with floats on the top and lead weights on the bottom and also a pocket in the center to trap the catch. Working the net over sand banks or weed beds on the run out tide is best. Before you use a drag net check with your state’s fisheries as all Australian states have different regulations for drag nets.

Scoop Nets
Scoop netting is one of the most popular ways to catch prawns it involves using a scoop and bright light to spot prawns as they move from the estuary’s to the ocean on the run out tide. Other times prawns will group on the bottom when they do this you place the net behind the prawn and kick toward it the prawn will then flick backward into the net. Popular prawning areas along the New South Wales coast it is often common to see the shallow flats covered with dozens and dozens of lights from people and families prawning. It is all pretty simple the hardest thing about prawning is making the decision whether not they will be in the bait bucket or on the table.

Prawns are our top bait for many reasons firstly they are cheap enough to buy easy to catch and simple to present in a natural manner. Passing the hook though the bottom of the tail and back out through the legs and you’re ready to fish. The size and style of the hook will depend on the size of the prawn and your personal preference. For smaller prawns I prefer long shank hooks up to size 1/0 this hook allows the prawn to lay flat along the hook with a half hitch around the tail keeping it in position for a very natural position and larger prawns on a 2/0 or 3/0 Kirby or bait holder style of hook. Other popular hooks are suicide and wide gap hooks also. Rigging live a prawn is also a simple process and best done in the lower half of the tail the higher up the tail the hook is placed the better and more natural the prawn’s movement will be. Peeled prawn is exceptional bait for large whiting and best presented on a smaller long shank hook from size 6 to size 1 depending on bait size again.

Cast nets are also a productive way to catch prawns there is a small learning curve involved with using a cast net so be sure to purchase it from a bait and tackle shop where you will be shown how to correctly throw one. Cast nets a more versatile than other nets as they can be used from jetties, boats and areas like deep mangrove creeks to catch prawns. When Banana prawns run in SE Queensland it is a common to see many boats grouped together cast large cast nets and taking large hauls of prawns with just a few good casts. As with any netting check your State fisheries before prawning.

Buy Online and Catch a feed this weekend.