Fish will take a variety of saltwater baits, some species are strict vegetarians, others are flesh-eating predators. While still, other types are nearly impossible to catch because of their plankton based diet. Finding a bait that will appeal to the fish you are targeting is what successful fishing is all about.

Basically, there are three categories of bait: live bait, dead bait, and lures. Lures. which are effectively artificial baits, best suit aggressive carnivorous fish. Lures will be dealt with in detail over the course of coming issues, and for that reason, they are touched on brie?y in this feature.

Successful anglers give thorough consideration to the type of bait they use and how they go about presenting it. Often. the most outstanding and productive baits can only be obtained by collecting them yourself. Also. as a rule of thumb, any bait works at its best when used alive or very fresh. Frozen. dried. salted or preserved baits must nearly always be considered second best.

Crustaceans include such critters as prawns, crabs, nippers, yabbies, shrimps and crayfish. This group inhabits all marine environments. from the estuary to the open ocean and, as a result, crustacea are among the most versatile of saltwater baits. 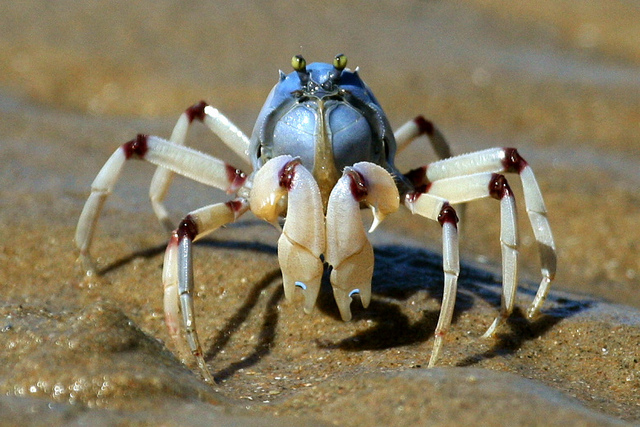 Crustaceans work best in tempting carnivorous fish. Bream, ?athead, whiting, trevally, leatherjackets, garfish, snapper, morwong and emperor are just a sample list of the fish that favour crustaceans in one form or another. Prawns should always be used either fresh or alive. If buying frozen prawns be choosy. Prawns showing marked discolouration or darkening around the head are a second rate bait. Considering the price demanded for bait prawns these days you have the right to be fussy.

To save money and obtain a fresh product. prawns can be collected at night in a scoop or drag net. They are best kept alive in an aerated bucket of water or damp ribbon weed. There are several methods for preserving prawns. The most fool-proof technique entails snap freezing them in a container of saltwater or in a plastic bag from which all excess air has been excluded.

Generally, gathering crabs doesn’t pose too much of a problem and as they don’t keep well, most anglers only collect enough for anyone fishing session. Crabs may also be frozen if circumstances demand, though the end product is inferior to fresh bait.

Nippers, shrimps and yabbies are all prawn like creatures that inhabit the estuary tidal ?ats. They are on a par with the prawn as an all-round estuary bait, although they are usually more difficult to procure in quantity and are rarely sold commercially. Most keen anglers obtain their own yabbies or pink nippers using a yabbie pump. Although very expensive, crayfish or lobster tails make brilliant bait for reef dwelling fish. Some southern anglers who have access to stocks of damaged crays speak very highly of their effectiveness. particularly on cold water fish such as the warehou or snotty trevally.

Shellfish are one of the most overlooked yet easily collected saltwater baits. Once a ‘bed’ has been located it usually requires little effort to gather a good stock of bait. In fact, care should always be exercised to avoid over harvesting
among the most popular shellfish, baits are oysters, pipis, mussels, cockles, clams, abalone and several other of the fleshy footed marine shell?sh such as turbans and conches. The gut of the abalone is a particularly good rock ?shing bait, while the common limpet is surprisingly effective at times too.

Except for the oyster, shellfish are generally reasonably tough baits that stand up to the hammering dished out by unwanted juvenile fish. Once the ?eshy foot has been removed for baiting up, the shells and scraps can be used as effective berley.

Specialist estuary anglers usually look no further than a worm bait for filling their creel. While beach anglers favour the tough beach worm as a bait for catching bream, dart, whiting, ?athead, salmon and mulloway. Bloodworms, squirt worms and blubber worms are the most sought after estuary types and are gathered with either a yabby pump, shovel or pitch-fork from the tidal sand and mud ?ats along vast stretches of our coastline.

In most states, there are restrictions on worm digging and pumping in specific areas. Consult your local fisheries department before you begin collecting them.

The closely related squid, octopus and cuttlefish make up a large part of many predator’s diets. Particularly the deep water, offshore species.

A single, pearly white leg or a whole smaller specimen of squid, octopus or cuttlefish makes an excellent bait for king?sh, mulloway and snapper.

Squid, octopus and cuttlefish have tough. sweet tasting ?esh that is also perfectly suited to bottom fishing in deep water, or where a more resilient bait is needed for long distance casting.

Like most baits cephalopods are best used fresh, even alive when that is possible. A pink discolouration in the ?esh of bought squid usually indicates that the bait is old or was handled badly prior to freezing.

Most fish are at least partially carnivorous. They prey on small fish still in their infancy, sick or injured individuals, or concentrate their feeding habits around the immense. nomadic schools of baitfish found in most aquatic habitats.

In the vast majority of fishing situations, fish bait of one sort or another is by far the most versatile offering an angler can make. Fish baits can be used alive, dead or cut into pieces, strips or chunks.

Small bait species such as garfish yellowtail, mullet, pilchards and mackerel are commonly fished whole for large predators. They are at their most effective when used as live bait, although well-presented dead baits also produce results.

Cut fish ?esh is undoubtedly the most popular single class of saltwater bait. Virtually any species of fish can be used as cut bait, however, the most effective baits are cut from red ?eshed, blood rich and oily fish like mackerel, tuna, barracouta and mullet.

Although often perceived as a rather novel approach to fishing, spinning or trolling with artificial lures is an effective and exhilarating way to catch fish. A surprising range of fish species will attack lures, if not for food then from purely territorial instincts.

Lures may catch anything from heavyweight blue water gamefish to supposedly shy, shallow water estuary species like bream and even whiting on occasion.

The enormous range of lures displayed in most fishing tackle shops can be a little bewildering, and may well be the reason why some anglers haven’t discovered the effectiveness of this angling style.

Butcher’s Baits, Bread and other Oddities

As most fish are opportunists occasionally swallowing any morsel that resembles food, anglers have discovered many rather unusual baits that catch fish. Garden snail’s tripe, chicken gut, cheese, Frankfurt, carrot and liver are just a few of these oddities.

Thinly cut steak strip is widely used by estuary bream anglers. particularly after a big fresh or ?ood when the water is discoloured. Chicken gut is another pungent, dirty water bait used primarily for bream.

Bread has long been known as an effective bait for many species of fish including mullet drummer, bream. garfish and trevally. Fresh bread. squeezed into a tight ball or cut into squares, makes the best hook bait, while stale bread soaked in water is excellent berley. Pudding bait. made from a mixture of cheese. Frankfurt, tinned sardines and ?our, is a top rate bream bait, especially for night fishing. Some specialists have their own closely guarded recipes, but most pudding mixes produce at times.

Some fish are vegetarians. while others include vegetable matter in their diet at least occasionally. The most popular species in this class pursued by Australian anglers include luderick or blackfish, black and silver drummer, zebrafish and mullet. All of these can be taken on baits of marine algae or weed, the most commonly used types being a short rosette shaped plant called a sea cabbage or ‘lettuce’, and one of the several species of long filamentous algae called ‘green weed’. Surprise captures on weed baits include bream, trevally, black spine foot (‘happy moments’), garfish and surgeon fish.

Artificial or manufactured long-life bait was scoffed at when it first emerged on the fishing scene some years ago. However, anglers willing to test out the product returned with encouraging results on fish such as bream. trevally, ?athead, whiting and small baitfish like yellowtail.

Made to a putty-like consistency and sold in airtight packets. artificial bait is a handy item to carry in the glove box of your car or the bottom of the tackle box for those emergency situations such as the family picnic or Sunday outing that turns into an unplanned fishing trip.

There is often a great division of opinion among the ranks of fishermen over the value of preserved bait. While there’s no disputing the fact that fresh bait is superior, frozen or salted bait is a convenience that many of us need to fall back on from time to time.

On occasions, when the seas are running or the weather’s turned sour, a reliable stock of preserved bait can be invaluable. Purchased baits like pilchards and prawns, if properly handled. can be stored for long periods of time and remain effective fish takers so long as they were fresh when initially purchased.

Anglers who catch excess fish supplies would be sensible to package them in single fishing session sized packs for future use. Soft-fleshed fish like tuna, tailor, salmon, mackerel, pike and herring benefit from a liberal salt covering. This will ensure the flesh remains firm and usable. It will even toughen up the soggier fleshed baits.